Due to the architectural limitations of the Villa, disabled access is currently not possible.

“We continually aspire to do something that we are proud of and want to share with the world. The renovated Villa Zlatica is definitely such a feat. I am especially happy that it offers both a working environment and a place to be enjoyed. May it long serve its purpose.”

Zoran Janković, Mayor of the City of Ljubljana

IVAN HRIBAR AND THE LJUBLJANA BOURGEOISIE A tribute to Ivan Hribar and his daughter Dr. Zlatica Hribar

The former home of Ljubljana’s revered mayor Ivan Hribar in Rožna dolina offers a glimpse at the life of a Slovenian bourgeois family in the early 20th century.

11 May 2021 – 31 January 2022
The first temporary exhibition tells the story of Hribar’s idea of Slavism in the 19th century and juxtaposes it to the contemporary mission that the FSK as an international foundation pursues in the 21st century. Exploring the paths that Hribar took as he was discovering the differences and similarities between Slavic nations, visitors are able to observe the development of cultural cooperation between Slavic speaking countries.

The library of the Forum of Slavic Cultures, located in the working and study room of Ivan Hribar, a great supporter of Slavic nations and their cultures, offers access to often still unknown or overlooked treasures of Slavic heritage, cultures and literatures in all Slavic and many other languages.

But in the first place, the Hribar Library has become home of the 100 Slavic Novels, the largest international cultural, literary and promotional project of Slavic literature, which has been taking place for a decade and a half under the auspices of the Forum of Slavic Cultures.

The bourgeois villa in Rožna dolina, once the home of Ljubljana’s famous mayor, still boasts a beautiful garden and a lawn. Situated almost in the centre of Ljubljana this venue without compare can bring unique added value to events such as receptions, press conferences, expert meetings or award ceremonies.

To rent Hribar’s Villa Zlatica with the garden and a tour of the museum contact:

With the cycle of events under the common title the LIVING VILLA the Forum of Slavic Cultures aims to bring life to the villa and its magical garden. Villa Zlatica’s charming interior and the garden’s green carpet set against a backdrop of Rožna dolina’s villas serve as Ljubljana’s new venue for both indoor and open air events.

Fabula Festival with Ana Marwan in the garden of Villa Zlatica

Drago Jančar and Robert Perišić at the Festival of Slavic Cultures 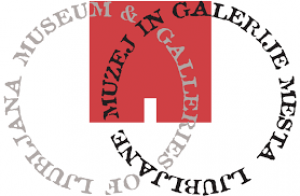 Maja Gojković, President of the FSK Board, Visits Villa Zlatica

Following the opening ceremony in Hribar’s Villa Zlatica, the Forum of Slavic Cultures invited ambassadors of Slavic countries in Ljubljana to visit its new home. So far, the villa has welcomed ambassadors from the Czech Republic, Croatia, Poland and Russia. 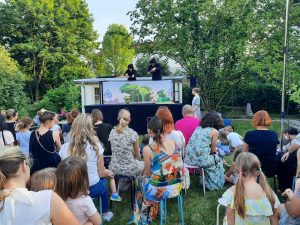 With the aim of enriching the programme activities in Villa Zlatica and developing new audiences, the Forum of Slavic Cultures has teamed up with the Ljubljana Puppet Theatre. The theatre presented itself for the first time in the garden of the Villa Ivan Hribar, the former Mayor of Ljubljana, with two sold-out performances of Sapramouse.

The Forum of Slavic Cultures, based in the renovated Villa Zlatica, has accepted the invitation to join the programme of the Open House Slovenia festival for the second time in a row. They delighted many visitors with a free tour of the renovated home of former Ljubljana Mayor Ivan Hribar. 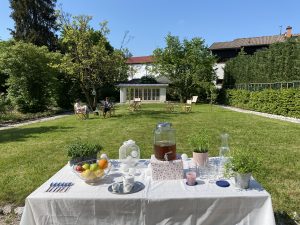 This year’s International Museum Day, which took place under the slogan The Power of Museums, the Forum of Slavic Cultures marked with a full-day program in Villa Zlatica.

The house on former Cesta na Rožnik (now Cesta 27. aprila 47) was built in 1910. Ivan Hribar bought it following the end of World War I and moved in in 1922. His daughter Zlatica (1913 – 2000) lived there all her life. She donated most of the family heirloom to the City Museum of Ljubljana and the villa to the State of Slovenia. In April 2010 the Government of the Republic of Slovenia transferred the ownership of the villa to the City of Ljubljana, which entrusted its management to the Museum and Galleries of Ljubljana.

Villa Zlatica was proclaimed the cultural monument of local importance and the renovation project for the villa was included in the Development Programme Scheme and the budget of the City of Ljubljana. The renovation began in September 2019, focusing on extensive maintenance and conservation-renovation works. The aim was to restore the villa as it was after its annexe was built in 1933 and until World War II, when Ivan Hribar still lived there with his family. Today, the villa still features the original builders’ joinery and wooden elements, the parquet floor, tile stove, terrazzo, metal elements and wall paintings.